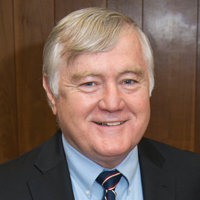 Ray Wright is the Dean of Engineering at the University of Rhode Island and holds the Vincent and Estelle Murphy Chair in Engineering. He has held this position since 2007.

Wright served as chair of the Department of Civil and Environmental Engineering and in 1997 was named a Distinguished Engineering Professor in the College of Engineering. He joined the URI faculty in 1981. He is a licensed Professional Engineer in Rhode Island.

During his URI career, Wright has been the principal investigator on many multi-disciplinary research projects in the areas of water quality monitoring and modeling of surface water systems. His work has been published in national and international journals. He has been the advisor and mentor to over 60 graduate students. In 2015 he received The Rhode Island Society of Professional Engineer’s, The Engineer of the Year Award.